The London scene will soon have a bright new star, our last milonga ended up being a valedictory for Julia. Although still fairly new to tango, she has put in a lot of effort and has been a bright smiling face we will all miss. We all wish her well and have no doubt she will be welcomed in London they are lucky to be getting her.

The Pant milonga (saturday night) itself was a great success everyone enjoyed themselves; This was not just about the people but the way everyone kept line of dance, refrained from overtaking and the nuevo stuff, also everyone was here to dance. Numbers were down, but I think it is just about this time of year, late night shopping, the bad weather, and full social calendars, all help to keep people away. Maybe when they realise what they missed they will be sorry and come to the next one, still I do not want to paint a bleak picture, there were enough people there, afterall I hardly sat down.

Unusually again there were more men than women, this I think helped. Although here it has been drummed into the men that they must ask the women to dance, we still get some who do not get enough dances. Not tonight though, the only respite the women got was to dodge into the kitchen. The crowd who were here were here just to dance, and any woman who sat for more than a few minutes was soon pounced on.

I never understood why, but Viv often does not get dances, whether the new dancers are intimidated or not I do not know (although she always follows the golden rule; never criticise or try to teach in a milonga). Again though tonight she danced all night, I had to make an appointment to dance with my own wife.

We had some shoes on sale as well, this provided a welcome diversion for all. Although Viv had a small collection of womens shoes, Dave had a quite comprehensive collection with mens shoes as well, so everyone was catered for.

Towards the end of the night we had a “cake dance” for Julia, like a “birthday dance” but it was not her birthday and we felt we had to do something for her. We finished with lots of hugging and kisses. We are a close community and are always sad to see one of our number leave, but we wish her well in her new life and have told her to keep in touch.

Dancing round the floor

Sharon in the lead

The week started badly as I had to miss the Monday class again, but with more venues now opening up it meant I would be free for the Thursday in Shrewsbury.

Sharon was concentrating on axis this week, and interestingly, we had the men working together and the women working together. We tried various bad postures, just to see how it felt. I think most of us men already had some idea of what it felt like to have a woman lean backwards, or stick her bottom out. However perhaps some of the women who did dance like this would perhaps now have a better idea of what we are up against. This, I hasten to add is not blaming all bad dancing on the women, but just maybe, if we can get you ladies following right, then the men will start learning to lead better.

I had my usual fun, of course, and insisted that I am still the best woman there, I did not get too many challenges on this, sometime I worry.

Numbers were down considerably this week, I know of no reason why this should be, still, those who were there will have benefited considerably from the experience.

In the practica after the class, I did feel that the ladies with whom I danced had improved their posture, leaving me more freedom to lead them into some more interesting moves.

Afterwards, in The Coracle, there were only four, myself, Viv, Dave, and Alison. An indication of the low numbers in the class. Even so we still had a lively tango discussion, where I tried to explain why the tango scene here could never be as good as Buenos Aires. I think, to understand fully, you need to have been there, but part of the reason is the shear population density. For this reason London is the only place that can hope to come close in the UK. Another reason, is the problem getting people off their backsides, the British love their television, Strictly is the nearest any of them get to a dance hall. Unfortunately I know of no answer, I see the problems, but cannot see a solution, we even have a minister for sport, but all he seems able to do is give them more football on television, Kill the TV and give us more dance venues, that should be our clarion call. My only hope is that confusion over the digital change over, may drive a few off their sofas.

I was not able to attend the Monday class this week. Viv made me go to work on my bike so that she could have the car. She is a bit laconic about the class, so I cannot report much, other than it seems for once  the numbers must have been more or less balanced, as she spent some time sitting out.

We returned to Shrewsbury again, and as usual I did my best to spread myself about (Tango Slut). Again I spent a lot of time explaining to the ladies how to do a good giro. So much depends on them doing it well, and every time I got a good sidestep I would reward them with a nice secada.

Later in the Coracle we had a lively debate on moves. While some felt that they were being deliberately held back, I do not think my argument was convincing enough. Tango, unlike other dances does not rely on set piece moves, the basics all need to be in place, then and only then can some improvisation take place.

The move under discussion needed a giro step executed well before it can be performed, and my view is that the level we are at at the moment is not yet high enough.

I recalled our first real tango in Spain many years ago. A lovely couple (who later invited us to their home, just because we tango) complained that they had walked to Madrid and back in the class. They were having the basics driven into them, even though they taught classes in London.

In the end I think that there is no real answer to those who think they can learn moves. Only time will show them the error of their ways. We all start off wanting to move like Copes and it takes years before we realise that it is not the moves, but the way we move that makes the difference.

Tango, the only place where you learn to run, before you realise you cannot walk.

Welcome to my World

With the forthcoming closure of AOL blogs I am moving my random thoughts and events here. If you enjoyed either “Dancing With Viv” or “Bob buys in Buenos Aires” then I hope you will visit here often, leave comments and even contribute. 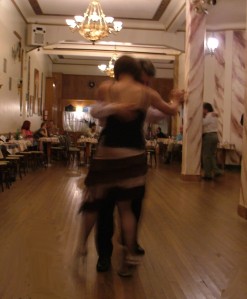 I am at present just coming out of a period of non stop work, all pay backs for the time I have spent this year in Buenos Aires, so events are few. Hopefully I can redress this in the next few weeks, and there is Christmas to come.

Tonight, Sunday, will see us at The Navy Club in Connah’s Quay. I do not expect any readership to be there, as it is mainly an older crowd.

Monday I will be at the Groves in Chester. Being a woman again for the beginners class, and helping where I can. See you there I hope.